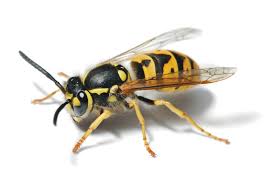 How Do I Know I Have A Wasp Nest?

If you see wasps entering & leaving a hole in the ground, a wall, roof or any other part of a building between May & November then you probably have a wasp nest. You may be getting ‘unexplained’ wasps inside a room which may indicate a nest nearby. In the Autumn as the days get shorter wasps get attracted to lights inside building which they confuse with sunrise.

Do not be tempted to block the hole up, this will make them angry and aggressive but will not kill the nest, they will find another entrance & may even come inside the house. Some species of wasps will build outside in bushes and trees. You will see a grey or brown structure made of a paper mache type material. Wasps are aggressive and will sting readily if they think the nest is in danger.

Why Should A Wasp Nest Be Treated?

If you don’t treat a wasp nest it will eventually die out but before this happens the nest will produce approximately 100 fertile Queens that will hibernate and start nests the following year. A nest will get larger until the Autumn & it is the Autumn & early Winter when they are at their most aggressive & dopey. This is when they are likely to sting people. The workers have finished their job of nest maintenance & collecting food for grubs & now are feeding on rotting fruit (this makes them drunk & more aggressive). Wasp nests can stain ceilings and even eat through them in some instances.

Every year there are deaths from wasp stings. Although they do some good by feeding on flies, caterpillars and other insects the wasp numbers are probably artificially high because buildings supply unlimited nest sites which in purely natural conditions would be restricted to caves, hollow trees and other natural cavities. They cause massive amount of damage to fruits in the Autumn.

We treat the nest or the entrance of the nest using an insecticide called ‘FICAM D* which contains the chemical Bendiocarb 1% w/w. This is a modern biodegradable insecticide that is not highly toxic to mammals, but is extremely so to the hymenopterous group of insects (Wasps, Bees and Ants). The entrance to the nest or the nest itself will be treated using this insecticide. 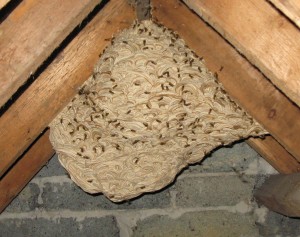 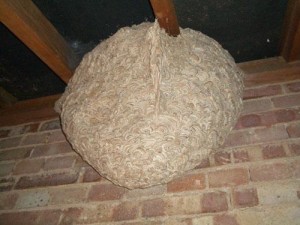 What Do I Need To Do Afterwards?

After treatment the nest will remain in a hyperactive state for up to 3 hrs, but usually Wasp activity ceases much sooner. Keep people & pets away from the area until activity has ceased. Close windows & warn neighbours to keep away.

The 3 main points to remember are:

The nest itself is made of a substance similar to paper mache, which will not rot or smell, so it is quite safe and hygienic to leave where it is. If the nest is accessible and you do decide to remove it, wait for at least four weeks as this will ensure that no one will get stung by any larvae that have hatched out after the queen has died, occasionally scratching may be heard from the nest during this period but as long as outside activity has ceased, don’t worry as this will soon die out. If the nest is treated in the Autumn dying wasps, Queens and Drones may still appear for up to 20 days after treatment. Never block the entrance to a nest unless you are quite sure the nest is dead e.g. Wasps are not flying in and out of the entrance.

It seems to be common sense to remove the wasp nest after treatment but the removal of a wasp nest is not necessary. Firstly if a nest was removed as soon as the treatment was carried out then the wasps that were out foraging would return, find no nest & attempt to rebuild the wasp nest. When they return & find a treated nest they either get contaminated by the insecticide or exhaust themselves by flying around the nest in a state of panic. They only attempt to rebuild the nest if it isn’t there. Secondly a wasp nest can never be re used. So if you want to remove the wasp nest then we recommend you wait at least 4 weeks before doing so. In a lot of cases the wasp nest is not accessible. The nest may be in a cavity wall or a soffat that cannot be seen.